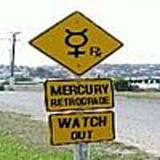 It’s here again. I’m talking about Mercury Retrograde. Within the past year, I’ve learned about Mercury Retrograde, having never heard of it before that. Since I’ve known about it… I’m pausing here to give you the scoop in case this is your first time hearing about it! Mercury Retrograde is a 3-week period that happens a few times a year in which it looks as if Mercury is moving “backwards” in its celestial path. During the time that this happens, there seem to be a higher incidence of delays, technical glitches, and slowdowns in communication. Now back to your regularly scheduled blog post…

Since I’ve known about Mercury Retrograde, it seems that a spotlight is shining on all of the delays, technical glitches, and communication gaps that happen during this period every time. And I’m wondering about it. Here’s what I’m wondering.

I welcome any input on this possibly backward reasoning.